During the much-anticipated Champions League clash between Tottenham Hotspur and Ajax this week, the eyes of the sporting world were once again directed towards the controversial issue of how a club (and in this case, a club doctor) should react when players suffer head injuries in the heat of battle. Jan Vertonghen, the Tottenham defender, clashed heads with a teammate, suffering a severe cut to his nose in the process – but after a brief assessment by the club doctor, he was deemed fit to continue. Moments later he was escorted from the pitch, legs shaking and barely able to stand. Although the club has since stated that Vertonghen did not suffer a concussion, the question on everyone’s lips was what the standard policy should be in such situations. Should clubs have the possibility of a “concussion substitute”, allowing more time for a proper assessment without the team being a man down if they have already made their three routine substitutions? Would at 10-minute break of that nature be sufficient to make a proper assessment? Would a “concussion timeout” be the way forward? Should an independent doctor be available at all matches, solely for the purpose of assessing head injuries?

All concerned agree that the health of the player must remain the priority, but with so much riding on the outcome of professional football matches, inevitably there will be pressure on doctors to send players back on to compete and it is difficult to balance the best interests of the player (bearing in mind that the player is a patient for these purposes) with those of the club. This is of course not a new issue, and it was interesting, in the week The Times reported that the issue with Vertonghen has prompted Fifa to look into the possibility of concussion substitutions, to look through the archives and see that our senior partner, Simon Eastwood raised the same issue with the Times, in a letter penned some 21 years ago: 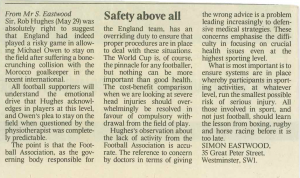 Issues over the role of doctors in sport are often difficult to grapple with, as was highlighted in the much publicised case of Dr Eva Carneiro, who became embroiled in a battle with Chelsea FC after rushing onto the pitch to treat Eden Hazard in the closing minutes of a Premier League match. We can only hope that, in the interests of both the players and the doctors who care for them in such high-octane situations, further clarity and guidance is soon to come.